While the 406th celebration of Guy Fawkes night was being celebrated in England by setting off fireworks, Redondo Beach, California was the center of another volcanic celebration, the Koyamada International Foundation's (KIF) 2nd annual United States Martial Arts Festival (USMAF) plastered the Redondo Beach Performing Arts Center with a different display of fireworks…a panorama of martial arts power to inspire youth to practice martial arts and use that knowledge as a vehicle to promote world peace. Furthermore, due to the life, spiritual and emotional draining earthquake and tsunami disasters that struck Japan's Tohoku region earlier this year, the SKF partnered with the Japan Foundation to additionally make the USMAF a spectacle dedicated to sharing Japanese culture with the community in honor of providing emotional support and a morale boost to the nation of Japan.

Besides all the fantastic martial artists and various Japan-related events that made this year's festival a sparkling success, the honorable mayor of Redondo Beach, Chinese American Mike Gin, not only made a special appearance to help get the festival rolling, but Mayor Gin also had a few fireworks of his own up his sleeve to add to the soul stirring day.

Apart from Mayor Gin's opening tribute to the event, as tokens of appreciation Mayor Gin presented three City of Redondo Beach Gold Coins, one of each given to the Director of the Japan Foundation, to the former KIF President Shoichi Nakagiri and one to KIF co-founder and Japan-Hollywood celebrity Shin Koyamada.
With heartfelt fervor, Koyamada shares, "It was my honor to receive the Gold Coin given directly from the Honorable Mayor Mike Gin. I never expected that he would do that. It represents the better friendship and connection between the City of Redondo Beach and our foundation.

"It is also a gold token of recognition and appreciation of everyone's hard work to make this event happen, an event that can help create a better international martial arts community and positively promote the community of Redondo Beach, a great place to be in.

"Even though Mayor Gin handed me the coin in person in front of the audience on the stage as the representative, this was clearly for all of us who participated and supported the event.

"What also added to the success of this year's festival were the 89,949 total views that witnessed the event during the course of the day on KIF's live streaming channel (Stickam.com/shinkoyamada) on Stickam.com.

Plans are already underway for the 3rd annual USMA Festival, which will feature several martial arts and martial artists who will make their debut at the Redondo Beach Performance Arts Center. 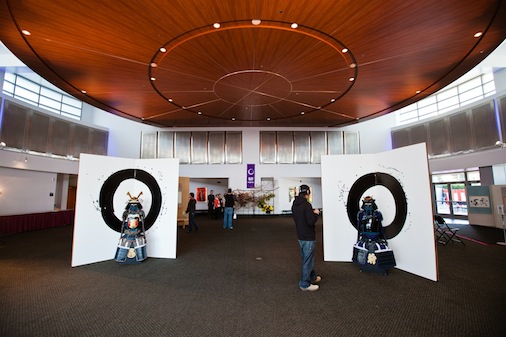