Study Abroad in the U.S. Seminar Reception in Okinawa

Inspired by the positive reception in Okayama, Shin Koyamada hit the road and took the US/Japan Brotherhood tour, featuring “Study Abroad in the U.S. Seminar” event, to the island of Okinawa.

Five months prior to this Okinawan leg of the tour and under the auspices of an official program sponsored by the United States State Department, Koyamada had already lectured at different cities throughout Japan. The goal of that expedition was motivate Japanese youth to study English and encourage them to study abroad at U.S. colleges and universities as well as to promote the friendship between Japan and the United States.

Although only able to spend two days in Okinawa, Koyamada bonded with the Okinawan residents. Thus during this current tour, he decided to return to Okinawa and allow himself seven days to stay on the island and learn more about Okinawan culture, history and people. It also gave more time for local organizations to work with KIF Okinawa’s office based in Naha City, to arrange for Koyamada to meet, greet and speak with more residents of the island.

Upon Koyamada's arrival on Okinawa, the United States Consulate-General of Naha, American Chamber of Commerce of Naha and KIF Okinawa hosted a “Shin Koyamada’s Invitational Reception Party in Okinawa” at the Kafuu Resort Fuchaku Condo Hotel.

The purpose of the reception party was to welcome Koyamada back to Okinawa. Notables in attendance included Consul General Alfred Magleby and Public Affairs Officer Ms. Eaton, their staff from the American Consulate-General of Naha, members from the Naha Chamber of Commerce, representatives from the American Chamber of Commerce and the U.S. Navy. Local media, and good folks from schools and other organizations also graced the event.

Consul General Alfred Magleby welcomed the guests using English and Japanese, which was followed by Koyamada's greetings of gratitude also in English and Japanese. Koyamada told the guests that he is very pleased to be back in Okinawa and thanked everyone for putting a lot of hard work and effort into organizing the many planned events for him and that he was looking forward to working together with the local residents in Okinawa. 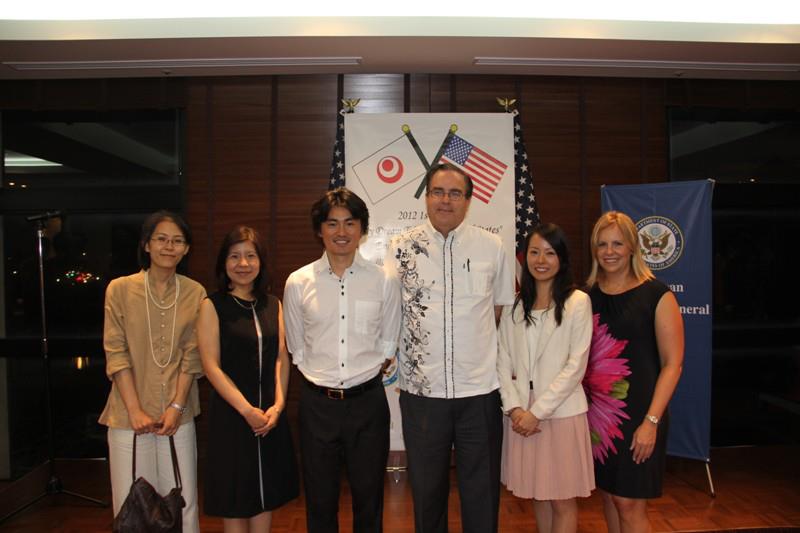