Upon Shin Koyamada's successful KIF Fukuoka, Miyazaki and Kagoshima educational tour with the US Consulate Fukuoka for young people in the Kyushu region of Japan, KIF Okayama handled preparations for the next round of exciting international exchange events. First up was the International Education and Culture Exchange Conference in front of over 100 people in the famous Sanyo Shimbun Newspaper’s Santa Hall in Koyamada's hometown of Okayama City, the capital of Japan's Okayama Prefecture.

This marked fourth event KIF has done with the US Consulate-General of Osaka-Kobe in Okayama this past year. The event was geared toward a more mature audience and featured three main speakers from the US: Patrick Linehan, the American Consul-General of Osaka-Kobe; Doug Erber, the President of the Japan-America Society of Southern California (JASSO); and Koyamada.

Mr. Kawabata, President of the Japan American Society of Okayama (JASO), welcomed the audience with his opening remarks, which were followed by greetings from Shinji Sato, a member of the Prefectural Assembly in absentia for Ryuta Ibaragi, Governor of Okayama Prefecture.

Koyamada briefly outlined the purpose and current activities of KIF Japan and Okayama, and then in Japanese introduced the first guest speaker and friend Linehan, who in English spoke about his background and the US government’s relief program, Operation TOMODACHI, which is geared toward helping victims of the Tohoku Earthquake and Tsunami Disaster. Koyamada next introduced the speaker and friend Erber, who screened a short video about JASSO and then in English spoke about what JASSO does and how the Society contributes to helping the Tohoku disaster victims via the TOMODACHI Initiative program.

During the Q&A session, an audience member using English thanked the speakers for their effort in revitalizing the Tohoku disaster area. The audience was unaware of the aforementioned relief programs and how they were helping out the victims. They lauded the efforts of Operation TOMODACHI and JASSO.

After the rousing success of the event, the speakers, staff and invited audience members attended a VIP reception party hosted by the Sanyo Shimbun Newspaper Company in their headquarter building. Koyamada, Linehan and Erber expressed their gratitude, after which Takamasa Koshimune, President of Sanyo Shimbun, gave an onstage toast. Linehan and Koyamada had a live TV appearance on a top rated local TV program on RSK. 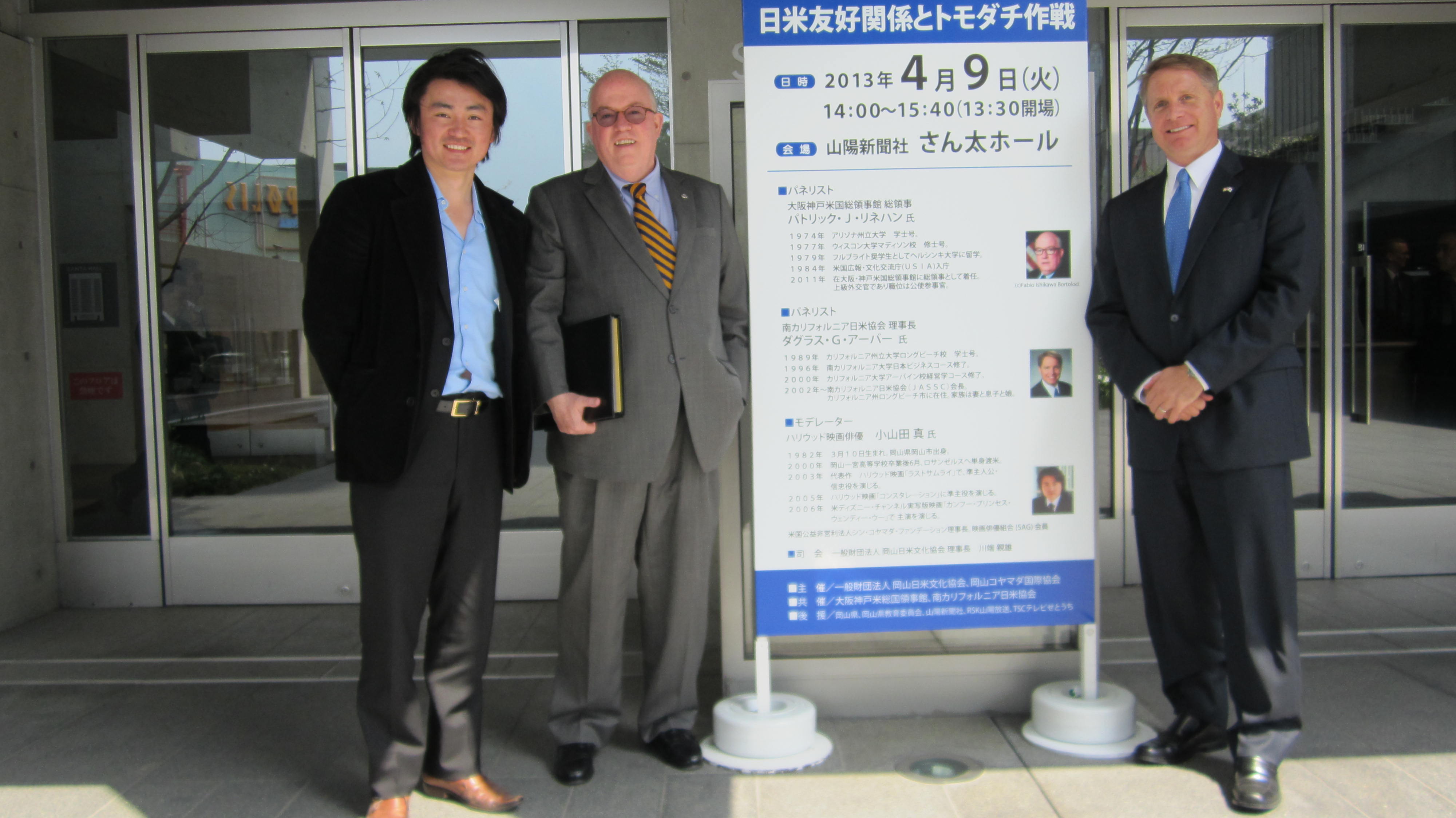