After spending a night in Okinawa city, Shin Koyamada continued his charitable activities for the Okinawan people by first stopping at the Onna Son Elementary and Middle School in Onna Village.

Upon their arrival, Koyamada and his volunteer team from KIF Okinawa greeted the principle and other teachers. After a short briefing with the principal, they headed up to the second floor where teachers and over 60 school children were waiting for him.

The principle opened the event by thanking Koyamada and his KIF Okinawa team for volunteering their time to inspire the students to study English and then introduced Koyamada.

For the next 20 minutes, Koyamada read to the children from an English story book while the principle read the Japanese translation written below the English sentence. The children beamed with excitement as they listened and followed along, recognizing each of the animal characters appearing in the book. Then as Koyamada read the book a second time he had all the children repeat each line in English after him. The young students were all excited and happy to speak each line slowly and loudly in English. Several students were able to memorize the English lines. The book reading was very successful. The event ended with a group photo. 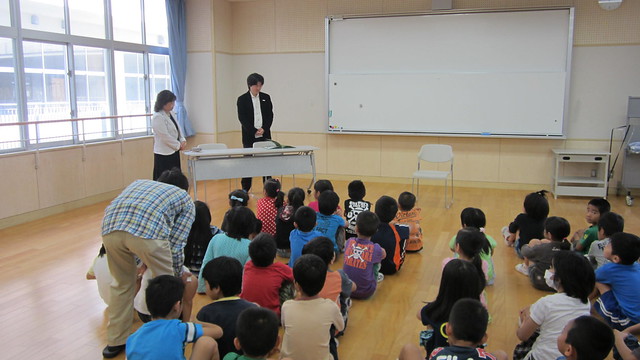