In Pursuit of the American Dream at OCSI

After his middle school presentation, Koyamada's third event of the day was a lecture in front of over 200 international students from all over the world at the Okinawa Christian School International in Yomitan Village, Okinawa. The school provides a comprehensive pre-kindergarten through 12th Grade educational curriculum in English for Okinawa's international community.

The opening welcome remarks from Deputy Executive Director of KIF Okinawa, Mr. Holland, was proceeded by greetings from the man who made the OCSI event a reality, Mr. Tokita. A few final words from the school's principle later, Koyamada took the stage.

Since everyone spoke English, Koyamada was requested to do his lecture and following Q&A session in English. Koyamada shared his life story discussing about what inspired him to realize his dream and to pursue them in America, and although he knew nobody in the US, couldn't speak the language, and had no place to stay, he boldly moved to America by himself, studied English, attended University and made a livelihood as an actor in Hollywood. He addressed the students as to the importance of remembering one's identity and where they came from, as well as to learn from the international cultural and educational exchanges among the people from different countries. He also spoke about his volunteer work and what his visions were for helping the people of Okinawa via his KIF Okinawa charity organization.

The event ended with Koyamada spending an additional 30 minutes having group photo sessions with each class, and signing autographs for all his fans.

The lecture was a sparkling success, as smiles, laughter and excitement from the students were unending and the questions from the audiences were non-stop. Since most of the students were international, Koyamada thought they couldn't understand English, thus his speech was in English. He later found out they all spoke Japanese fluently and so he wondered why they wanted him to speak in English. He'll never know. 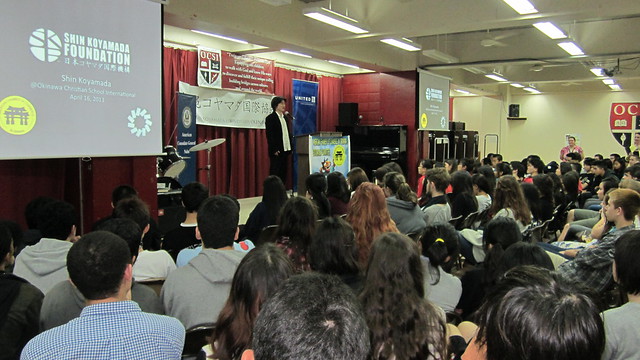