KIF Okinawa organized the event “Open Welcome Party for Shin Koyamada” that was set up in the large outdoor parking area of the popular American Village in Chatan City, Okinawa. With big blue sheets covering the ground and tents pitched for autograph sessions, a giant portable movie screen was bought in to show a film. The party was sponsored by the American Chamber of Commerce of Okinawa, the US Consulate General of Okinawa and Depot Island. The purpose of the party was for Koyamada to strengthen the bond with local Okinawans at the grassroots level, network with groups of new people and thank everyone for supporting the activities of KIF Okinawa.

Upon arrival, Koyamada greeted everyone on site with handshakes. KIF Okinawa Deputy Executive Director Mr. Holland gave opening remarks to over 100 local residents who wanted to meet Koyamada in person. After greeting the audience and welcoming them to the inaugural American Village party, Koyamada explained what he and his KIF Okinawa team do for Okinawa.

Immediately following Koyamada's brief message, there was a special karate performance put on by a group of American karate practitioners from Chicago who happened to be in town. They were former students of his friend the legendary karateka, Grandmaster Tadashi Yamashita. Koyamada joined the performers for a group photo.

After the powerful Okinawan karate performance, Koyamada signed autographs and took one-on-one photos for one hour will all his fans, which included many younger folks who saw his Disney Channel movies and TV shows and older people who mostly saw The Last Samurai. It's a good thing the tents were set up as it began to rain. However, each person in the long line patiently waited for their chance to meet and take a photo with Koyamada.

Everyone got their chance to speak with Koyamada and walked away with their friends and families with big smiles. Koyamada mentioned that he always enjoys speaking with the Okinawan people regardless of their age. Although Koyamada was not Okinawan, he noted that every Okinawan face always seemed to be very happy, passionate, friendly and welcoming. 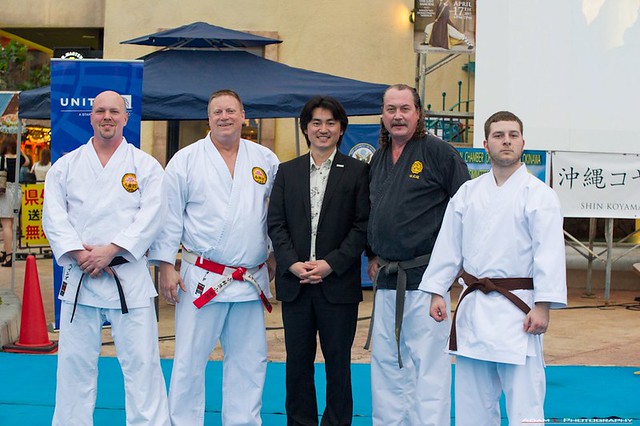