After the Open Welcome Party ended, Koyamada and the staff attended a VIP Welcome Party organized by KIF Okinawa. He was able to network with more local residents and establish better relationships with the American Village community in Chatan City, Okinawa.

Approximately 100 VIP guests from various organizations who supported KIF Okinawa's activities, participated in the event. These included the US Consul General Alfred Magleby and his staff from the American Consulate-General, various representatives from the Okinawa Prefectural and City Governments, individuals from US Bases and the American Chamber of Commerce of Okinawa, and people from local schools, corporations, nonprofit organizations, community leaders and supporters from different areas of the Okinawa Prefecture.

KIF Okinawa Deputy Executive Director Mr. Holland gave welcoming greetings and introduced Koyamada who thanked the audience for attending the party and for supporting the causes of his KIF charity. After briefly explaining what the KIF does in Okinawa, but before introducing Magelby, Koyamada offered congratulatory words to the representatives from Itoman city Government who had recently became the official Sister City of Redondo Beach, California...Redondo Beach being the city where KIF holds its United States Martial Argts Festival. After everyone's speeches, the president, who is also the Okinawan owner of the American Villages added his remarks.

The guests enjoyed networking with each other as they dined on Okinawan foods and drinks prepared for them by the restaurant that KIF Okinawa and the sponsors rented out for the night. 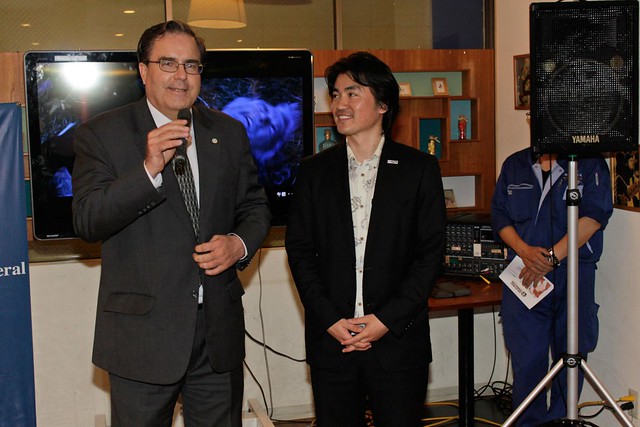