In Pursuit of the American Dream in Nago City

After the book reading and video presentation to the elementary school students, in the same gymnasium, Koyamada welcomed a second round of teachers and 100 students from a Nago City middle school.

The Consulate representative welcomed the students then introduced Koyamada who spoke about what inspired him during middle school to pursue his dream of acting in Hollywood, how he planned for the journey and how he accomplished his goals overseas.

After his talk, Koyamada decided to pair up with volunteer students and share a few basic mannerisms of American culture in regard to how Americans introduce themselves to each other. He then paired up the students with each other so they could practice what to do and say whenever they met an American. Teachers and students were excited to learn about the cultural differences between Japan and the US. After his demonstrations of cultural difference, Koyamada fielded questions for 20 minutes.

The reason Koyamada did this kind of demonstration was because elementary and middle students tend to get bored sitting around and listening to someone talk, admitting that he was the same way back then. So he wanted to engage them in physical interactions and activities. It worked well.

After the middle school lecture, Koyamada and the Consulate rep stopped by Nago City Library to visit the American Shelf library section (loaded with tons of English books about the US) and took photos with the library staff. Next stop was a 90-minute interview at Nago city's most popular radio station FM Yanbaru, where he spoke about KIF Okinawa and the American Shelf section of Nago City Library. 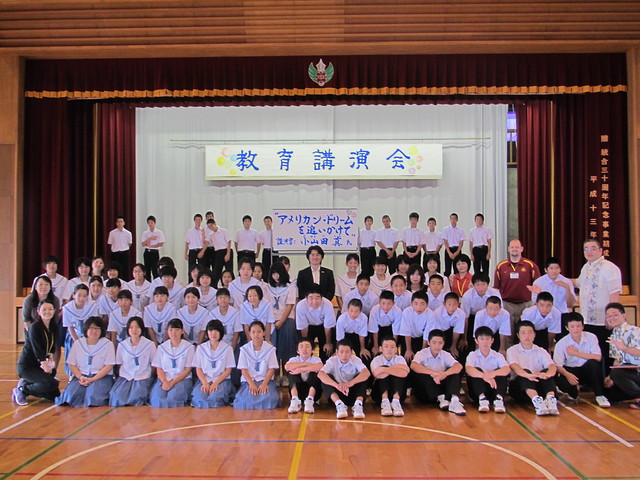