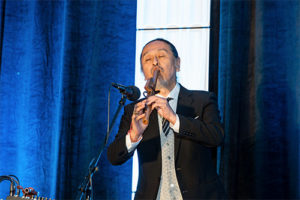 For the live entertainment, KIF invited a renowned Japanese flute musician Hiroki Okano who flew all the way from Japan to perform at the annual conference. Since Hiroki’s solo music career launched in 1987, he has become known as one of Japan’s premier New Age and Ambient artists involved in various environment and peace related events all over the world including the International Dolphin & Whale Conference, the International Underwater Film Festival Yokohama and the World Peace & Prayer Day which was held at Mount Fuji with aboriginal elders from around the world. He has also performed at other large-scale international events such as Rainbow 2000, The Fuji Rock Festival, and The Glastonbury Festival UK through a collaboration with the late Dave Goodman, a former producer for the Sex Pistols, where he has now performed for more than ten years. By fusing together sounds of nature and a variety of international folk instruments, Hiroki Okano renders a feeling of awe and appreciation of nature based on his own Japanese sensibility. Currently, Hiroki is active as a composer and passionately performs his compositions at sacred spots and natural heritage sites around the world. 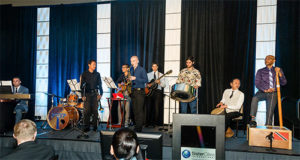 At the conference, there were more than 500 attendees, including mayors, city councils, entrepreneur, cultural and educational leaders, community leaders, regional sister cities leaders as well as over 100 American and international students who attended the SCI's Youth Leadership Summit.

To read more about the annual conference, please visit the official site here. To view the photos, please click here.

About Sister Cities International
Sister Cities International was created at President Eisenhower’s 1956 White House conference on citizen diplomacy. Eisenhower envisioned an organization that could be the hub of peace and prosperity by creating bonds between people from different cities around the world. By forming these relationships, President Eisenhower reasoned that people of different cultures could celebrate and appreciate their differences and build partnerships that would lessen the chance of new conflicts.